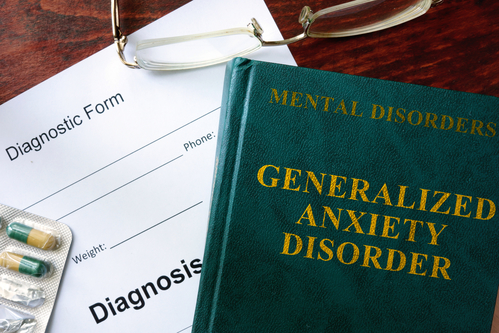 Anxiety disorders are more common than most people would think. In fact, anxiety is the common mental illness in the United States today, affecting roughly 18% of the adult population. Of this, more than 3% of adults—almost 7 million people— suffer from Generalized Anxiety Disorder, and some cases are so extreme that people need prescription medications just to function normally.

Generalized Anxiety Disorder, or GAD, is characterized by symptoms of chronic worry that are often baseless and much more drastic than average anxiety. The Merriam-Webster Dictionary defines GAD as “an anxiety disorder marked by chronic excessive anxiety and worry that is difficult to control, causes distress or impairment in daily functioning, and is accompanied by three or more associated symptoms (such as restlessness, irritability, poor concentration, and sleep disturbances).” GAD is often triggered by average, everyday occurrences that might otherwise cause little tension in someone without GAD. Additionally, women are twice as likely to suffer from GAD than men. There are several prescription medications that can calm this form of anxiety, and they are often categorized under one of these four kinds of medicine.

This particular class of medicine is often utilized for short-term GAD management. Benzodiazepines evoke a sense of relaxation by reducing the physical symptoms of anxiety, like muscle tension. They are considered by most medical professionals to be one of the most successful prescription medications for GAD as well as other anxiety disorders, such as panic disorder and social anxiety disorder.

Of the four classes of prescriptions drugs on this list, benzodiazepines may be the most effective for treating most anxiety disorders. After all, there is a reason it is considered the standard for anxiety treatment. However, there is one major drawback to long-term daily use of benzodiazepine. This class of drug carries a high risk abuse and physical/psychological dependency. Because of this, benzodiazepine prescriptions are usually supplanted by SSRIs. This greatly lowers the chances of benzodiazepine addiction in GAD patients.

Certain antidepressants are used to both manage and prevent anxiety disorders like GAD. These are called selective serotonin reuptake inhibitors (SSRIs). Similar to benzodiazepine, SSRIs relieve physical symptoms to calm anxiety. However, this prescription medication does this by blocking the reabsorption of serotonin in certain nerve cells of the brain. The leftover serotonin that was blocked improves mood in other parts of the brain. The most popular SSRIs that are used to treat GAD include fluoxetine and paroxetine.

SSRIs are highly effective at managing GAD symptoms, but they do also come with some minor side effects. These can sometimes include sleepiness, sleeplessness or weight gain. Overall, SSRIs are considered a successful treatment for GAD and even other anxiety disorders, although higher doses may be required to treat conditions like Obsessive-Compulsive Disorder (OCD).

Serotonin-norepinephrine reuptake inhibitor (SNRIs) are a class of prescription medications that is most notable for its dual-action anxiety treatment. SNRIs work by increasing the brain’s levels of neurotransmitter serotonin and norepinephrine. Like SSRIs, these increased levels are due to the blocked reabsorption of these chemicals in certain parts of the brain. The redistributed serotonin and norepinephrine then work to improve mood and decrease anxiety. The most prescribed SNRI medications include desvenlafaxine and duloxetine.

This class of medications is considered just as successful as SSRIs, and so they are both considered the first line of medicated defense against GAD. As is the case with any other medication, SNRIs may produce some side effects. These usually include sleeplessness, headache, stomach upset, and a slight increase in blood pressure.

This class of prescription medications has grown is popularity among doctors and clinical psychiatrists over the years. This is mainly due to the concerns about long-term benzodiazepine use and the addictive qualities the drug has been known to show. Still, even tricyclic antidepressants have their drawbacks. They can bring about side effects like constipation, dry mouth, blurred vision and even a small drop in blood pressure.

Getting Your GAD Prescription Medications Through Rx Helper

At Rx Helper, we make it our mission to ensure that you get the prescription medications you need so you can go about your day to day routine with confidence and ease. If you or someone you know has GAD and would like more information about these types of medications and their side effects, please visit our medications directory or call us at 877-767-3297.